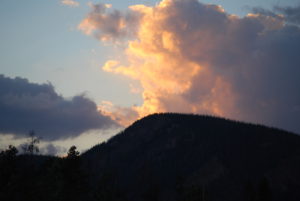 I came out of work on Friday to a fresh layer of snow.  The storm had just passed and the sky was beautiful.  The sun was low so cast a beautiful glow onto those mid-winter storms against a deep blue sky.  I jumped into my car just as Science Friday was starting on NPR.

Did you know that those clouds are full of bacteria?  What are they doing up there and should we be concerned?  You can learn more at Science Friday, but here is what I gleaned from the broadcast.

Soil bacteria are being lifted off the earth all the time.  A quick gust of wind or even just a steady, gentle breeze is enough to separate a bacteria from the soil, a plant surface, or even your skin.

A quick aside, most bacteria is benign to us and some is even beneficial.  We call that bacteria that actually helps us our microbiome.  Very few bacteria actually hurt us.

So the bacteria gets dislodged and it catches a ride on warm rising air.  These daily convection cycles in our atmosphere carry the bacteria as high as the stratosphere.  As we all know, as you go higher into the atmosphere it get colder and eventually moisture condenses into clouds.  Well, it turns out that you need something for the moisture to condense upon.  Scientists call this process nucleation and it can occur on dust or bacteria.   Which by the way are probably frozen solid at this time.  Some moisture will form around a bacterial cell and then other moisture will start to condense on it.  When you get about a million specks of moisture all clumped together their mass will cause it to fall as a raindrop.  With a cell of bacteria at its core.

Bacteria can use this process to spread across the globe, so are they spreading disease?  Remember, most bacteria are harmless.  They go about their lives decomposing dead organic material.  But the verdict is out as to whether or not plant bacterial and fungal diseases can be spread in this way.  Listen o the whole broadcast at https://www.sciencefriday.com/segments/the-microbiome-of-the-clouds/

27- Spring Hike Along the NST,  Southwick

7- Its Not An Olmsted Park, Springfield